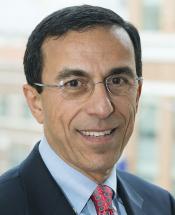 Dr. Doghramji has been Chief Editor for the Jefferson Journal of Psychiatry and serves as a reviewer for numerous medical journals, including Sleep, Sleep Medicine, the Archives of General Psychiatry, the American Journal of Psychiatry, the Journal of Clinical Psychiatry, and the Annals of Internal Medicine. He has authored more than 150 journal publications and book chapters and has edited and written 3 books. He has been the recipient of numerous grants. His published works and research focus on a wide variety of sleep disorders, including excessive daytime somnolence, sleep apnea syndrome, and insomnia, as well as depression and anxiety disorders.

Dr. Doghramji received his medical degree from Jefferson Medical College and completed his internship in internal medicine at Presbyterian-University of Pennsylvania Medical Center in Philadelphia, his residency in psychiatry at Thomas Jefferson University Hospital, and his clinical research fellowship in sleep disorders medicine and polysomnography at Montefiore Medical Center/Albert Einstein College of Medicine in the Bronx, New York. He is also an Academic Associate in the Adult Division of the Institute of the Psychoanalytic Center of Philadelphia.