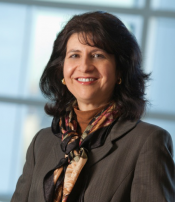 Dr. Sajatovic is Professor of Psychiatry and of Neurology at Case Western Reserve University School of Medicine in Cleveland, Ohio.  She is a researcher, educator, and clinician who has devoted herself to the study and treatment of traditionally hard-to treat populations with central nervous system (CNS) disorders.  Dr. Sajatovic is Director of Geropsychiatry at University Hospitals Cleveland Medical Center (UHCMC), holds the Willard Brown Chair in Neurological Outcomes at UHCMC/Case Western Reserve University School of Medicine and has subspecialty certification in Behavioral Neurology & Neuropsychiatry.

Dr. Sajatovic’s research interests have focused on outcomes in mental illness such as depression and bipolar disorder and in neuropsychiatric outcomes of brain disorders including stroke, epilepsy, Parkinson’s disease and dementia.  Dr. Sajatovic is a recognized expert in the areas of treatment adherence and in health promotion. She also has research interests in the psychopharmacology of psychosis and mood disorders, and in mental health rating scales. She has been the U.S. lead on a neurology medical education partnership initiative (MEPI) project in Uganda, Africa and is Principal Investigator on a stroke risk-reduction project, also in Uganda, that is funded by the National Institute of Neurological Disorders and Stroke (NINDS).  Over the last two decades, Dr. Sajatovic has been the recipient of multiple research grants including support from the National Institute of Mental Health (NIMH), the National Institute of Aging (NIA), the National Institute of Nursing Research (NINR), the Centers for Disease Control and Prevention (CDC), the Ohio Department of Mental Health (ODMH), the Veterans Health Administration (VHA), a variety of Mental Health Foundations, and Industry Sponsored clinical trials.

Dr. Sajatovic has published widely on treatments and health services delivery as well as in the area of treatment adherence and health promotion in a variety of CNS disorders.  She has authored or co-authored over 200 peer-reviewed publications, and has published over 40 book chapters or books on neuropsychiatric topics.

Dr. Sajatovic has been a guest lecturer at numerous academic and community settings, both on a national and international level, including speaking to consumer and family advocacy groups for individuals with psychiatric illness.  Dr. Sajatovic has been a recipient of the Exemplary Psychiatrist Award bestowed by the National Alliance for the Mentally Ill (NAMI), and was a Depression and Bipolar Support Alliance (DBSA) 2006 Gerald Klerman Investigator Award winner in 2006 and in 2016.