Join fellow healthcare professionals for this symposium featuring the world's leading experts who will discuss the latest advances in the pharmacotherapy of anxiety disorders, mood disorders, schizophrenia, dementia and alcohol dependence.

Hotel Block
GME has arranged a limited number of discounted rooms for attendees of this meeting.  For those who are interested in booking a room, please visit the Westin's special reservation page for this meeting.  Please note, this offer is available through December 19, 2014, and is subject to availability.

Pharmacotherapy is the mainstay of treatment for psychiatric illnesses. Unfortunately clinicians practice non evidence based pharmacotherapy in the real world. The consequences of undertreatment include poor prognosis, difficulties in interpersonal, occupational and social functioning and suicide. There are several factors contributing to undertreatment. Provider factors include poor professional school education, limited training in interpersonal skills, stigma, inadequate time to evaluate and treat psychiatric illnesses, failure to consider psychotherapeutic approaches, and prescription of inadequate doses of medications for inadequate durations. As an example less than 15% of patients receive guideline concordant care for depression. Another example is the misdiagnosis of patients with bipolar depression as having major depression with needless trials of antidepressants rather than evidence based treatments for bipolar depression. Certain ethnic groups like African Americans, Mexican Americans and Caribbean Blacks are even less likely to receive care. The same is true in patients with bipolar disorder and schizophrenia.

Global Medical Education and Postgraduate Institute of Medicine (PIM ) recently surveyed more than 3,500 CME activity participants on what clinical issues/problems within their scope of practice they would like to see addressed in future educational activities. A significant percentage of respondents reported the following topics as areas of interest: ADHD in children and adults, role of rTMS treatments in psychiatry, neurobiology for psychopharmacology, treating schizophrenia particularly residual negative and cognitive symptoms, safety of psychotropics in pregnancy, mood disorders in children and adolescents, and pharmacotherapy in the following areas: geriatrics, bipolar depression and mixed states, treatment resistant depression particularly for residual cognitive symptoms, eating disorders including binge eating disorder, and sleep disorders particularly hypnotics with new mechanisms of action.

With the availability of several choices of medications even within the same class the clinician has difficulty choosing the best evidence based treatment that takes into consideration not just efficacy but also side effects and costs. Certain symptom domains like cognitive disturbances in major depression and schizophrenia that may be a cause of low rates of remission and increased rates of recurrence can now be targeted with newer antidepressants and potentially innovative adjuncts like alpha7 agonists which may also have utility in patients with dementia. Furthermore studies including the STAR-D, STEP-BD and CATIE trials have demonstrated that even after several levels of treatment a significant proportion of patients do not achieve remission in depression, bipolar disorders and schizophrenia. The use of evidence based augmentation strategies like L-methylfolate and atypical antipsychotics (including newer agents with a more favorable side effect profile) should be used rather than non-evidence based treatments like bupropion, buspirone, and combination of antidepressants. Familiarity with new and innovative approaches including neuromodulatory treatments particularly rTms to manage treatment resistant populations are warranted but based on the evidence and not conjecture. This unfortunately does not occur in the real world with costs to the patients, families and payors. Use of neuromodulatory treatments in dementia, ADHD, substance abuse, and eating disorders will also be discussed. New agents in development that target negative and cognitive disturbances in patients with schizophrenia will also be discussed. This is one of the great unmet needs in the treatment of schizophrenia.

In certain disorders there is concern in the lay media about overdiagnosis ( eg. ADHD) and overtreatment, such as in children and adolescents, pregnant and nursing mothers, and in the elderly particularly with regard to stimulants, antidepressants and antipsychotics. Unfortunately the evidence base is often ignored in the consideration of the judicious use of psychotropics in accurately diagnosed populations which this symposium will address. Controversies and myths surrounding the treatment of these populations will be discussed. New and innovative treatments including use of dopamine-norepinephrine reuptake inhibitors in ADHD will be discussed.

According to the National Center for Sleep Disorders Research at the National Institutes of Health, about 30-40% of adults say they have some symptoms of insomnia within a given year, and about 10-15 percent of adults say they have chronic insomnia. Unfortunately many psychiatric patients have insomnia as a symptom of the psychiatric illness or often as a side effect of the medications. Choosing evidence based treatments with the least risk of dependence and disruptive day time effects particularly on alertness and cognition is key to the management of the psychiatric illness. New and unique mechanisms of action for treating sleep disorders will also be discussed.

Non adherence is a pernicious concern in patients with psychiatric illnesses. Innovative approaches including the use of injectable long acting medications are under-utilized in the US. The symposium will address the evidence base for these treatments in schizophrenia, bipolar disorder and substance abuse.

There are marked differences in the receptor pharmacology of psychotropics leading to differences in efficacy and side effects. The symposium will address our understanding of the neurobiology of psychiatric illnesses and hypothesis of how these medications work including their effects on synaptic function, gene expression and neurotrophic factors.

The symposium will also address the role of non-pharmacological treatments that busy psychopharmacologists can incorporate into their practice that will enhance remission and improve outcomes. The important role of the therapeutic alliance will be emphasized throughout this symposium.

This activity has been designed to meet the educational needs of physicians, physician assistants, nurse practitioners, and registered nurses who care for patients with psychiatric illnesses.

Upon completion of the activity, participants should be better able to:

1. Explain the effects of pharmacotherapy on synaptic transmission, genetic expression and BDNF

3. Assess the latest advances in the use of psychotropics in children, adolescents, elderly and women.

4. Employ the appropriate treatment of insomnia and substance use disorders

6. Provide appropriate care and counsel for patients and their families

Credit Designation
Postgraduate Institute for Medicine designates this live activity for a maximum of 6.25 AMA PRA Category 1 Credit(s)™. Physicians should claim only the credit commensurate with the extent of their participation in the activity.

Accreditation Statement
Postgraduate Institute for Medicine is accredited as a provider of continuing nursing education by the American Nurses Credentialing Center’s Commission on Accreditation.

A statement of credit will be issued only upon receipt of a completed activity evaluation form and will be emailed to you within three weeks.

Disclosure of Conflicts of Interest
Postgraduate Institute for Medicine (PIM) requires instructors, planners, managers and other individuals who are in a position to control the content of this activity to disclose any real or apparent conflict of interest (COI) they may have as related to the content of this activity. All identified COI are thoroughly vetted and resolved according to PIM policy.  The existence or absence of COI for everyone in a position to control content will be disclosed to participants prior to the start of each activity.

Americans with Disabilities Act
Event staff will be glad to assist you with any special needs (i.e.: physical, dietary, etc.). Please contact Angela Masand prior to the live event at (212) 633-0003.

Fee Information
There is no fee associated with this symposium.

9:45-10:30 AM: Pharmacotherapy of Depression: State of the Art and Future Directions
Michael Thase, MD (University of Penn.)

Please download meeting materials on your desktop or tablet devices. Mobile devices, such as iPhones and Androids, do not support these downloads. 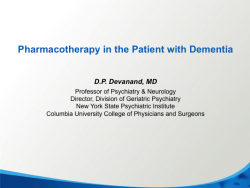 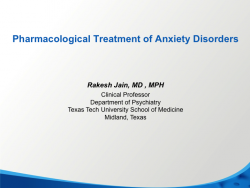 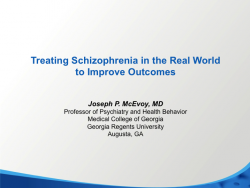 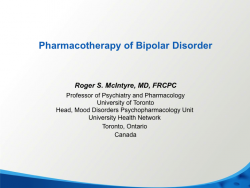 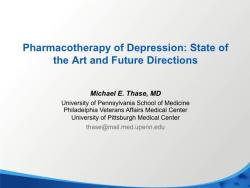 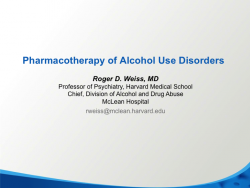 All material on this website is protected by copyright, Copyright © 2020 by GME Inc. This website also contains material copyrighted by 3rd parties.
GME does not provide medical advice. The website and articles are intended for informational purposes only. They are not a substitute for professional medical advice, diagnosis or treatment. Never ignore professional medical advice in seeking treatment because of something you have read on the GME Website. If you think you may have a medical emergency, immediately call your doctor or dial 911.